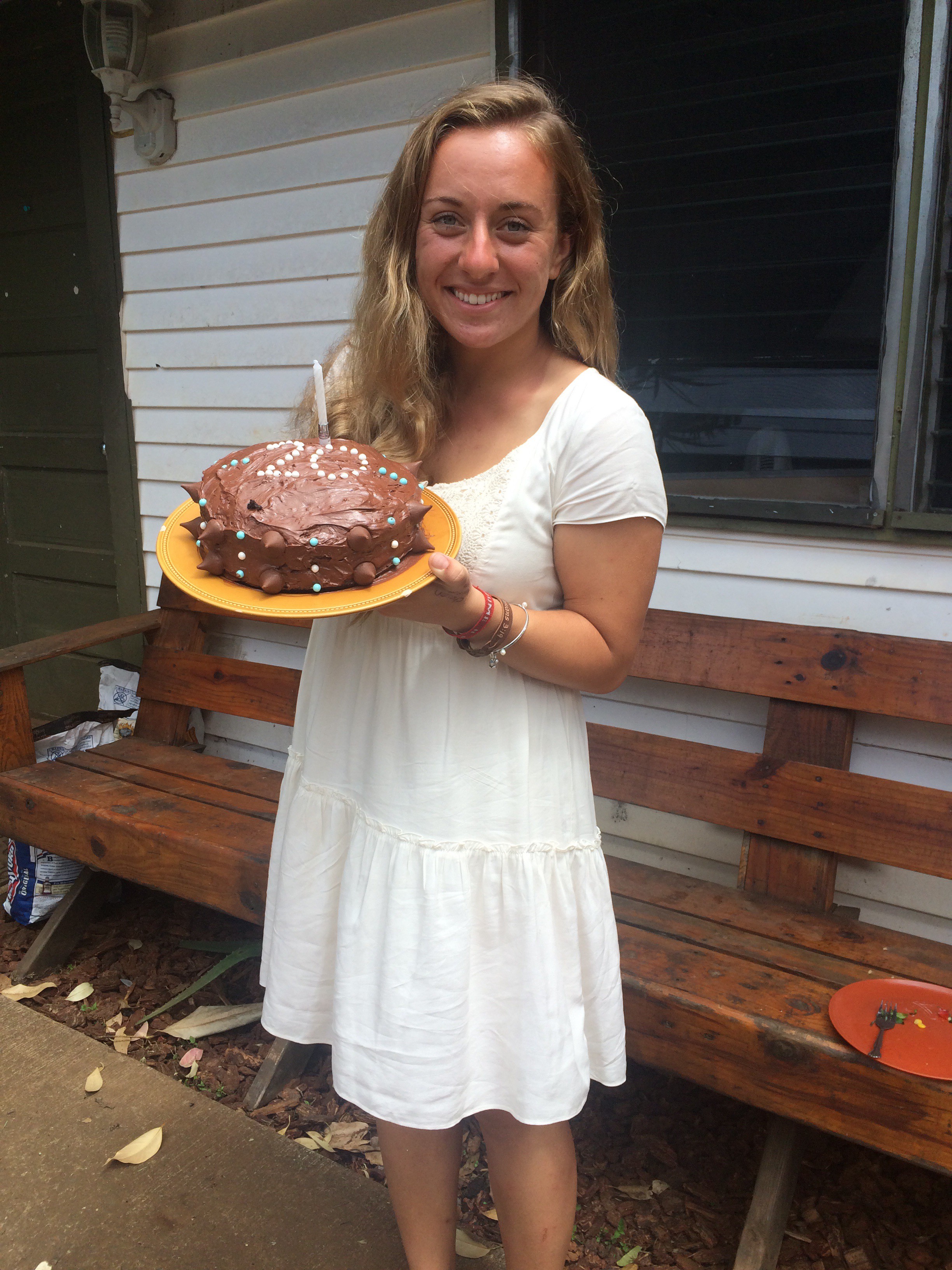 Week one of my YWAM experience is already behind me, and I have so much to share!

I got here Thursday night to meet the 27 girls and 11 guys I'm going to be living and growing with in the next six months, plus the many staff members and mission builders also living on base! We're all living in a house built for a family of five, which means pretty tight living conditions.There's a room here where 18 of the girls live in six different three high bunk beds, and another room with eight girls sleeping on 4 two high bunk beds. Then there are several more rooms for staff girls, and a back house for the boys. There are two bathrooms with two showers in each of them..... so we're quickly learning how to die to ourselves and our personal space. Everyone here is so kind and friendly, from all over the United States as well as Canada, Switzerland, Norway, Guatemala, and England. We're a mess of accents and cultural differences. It's exciting to see how by God's grace so many people from so many places can live this close together harmoniously.

We had free days the first two days of being here, where we learned to hitch hike (the main mode of travel here for YWAMers) and explored the beaches and towns near us. It was a lot of trying to remember everyone's names and settle in to our new home. Sunday night we had opening ceremony where we were introduced to the staff and families apart of YWAM and what each of them did here. After a time of greeting and worship it was announced that we would be going on something called Exodus. Seeing that the Exodus the Isrealites were on was 40 years of wandering in the wilderness, our excited reaction to the announcement implies either a lack of biblical knowledge on our parts or an innocent trust that everything about YWAM would be fun fun fun. Oh silly past self, how little you knew!

Ah, Exodus, a three day adventure (not that you know it's three days while you're there, or what time it is, or what you're doing, or anything at all) for which you could bring only the clothes on your back, your Bible, and sleeping bag. You'll notice this list does not include soap or deodorant or toothbrushes or anything of that sort (and trust me we quickly smelled the reality of that). We slept in tents in the pouring rain, cramped 9 girls to a tent in states of cleanliness that were lets just say displeasing to the senses. We were given each a red solo cup and a pair of chopsticks from which we ate ramen noodles (lunch and dinner) or oats and water (breakfast) for every meal. Every meal. Some people were able to find oranges that were only a little rotted on the ground and trust me they were prized possessions. Although we had fun laughing at our living conditions (the irony of the truth behind all those who had joked that we were sure about to "suffer for Jesus in Maui" was not lost on us) it was actually such a joyful time of worship- singing all together to the God we'd given up these six month for- telling our testimonies with a vulnerability that the clean, well rested, well fed versions of ourselves might never have, and bonding to a depth that a place with showers would never have allowed for (or at least that's what the staff kept telling us....) (just kidding it's really true). On the third day after every testimony had been told and lifting our arms to worship resulted in a smell that could slay someone faster than the Holy Spirit (just kidding again.... sort of) we were told that we were going to switch locations because of the heavy rain. Now, I had been told by people who had already done YWAM Maui that Exodus would end in that way, with a facade of needing water or too much rain or some kind of story taking us to a feast. But by that point, I was hesitant tohope that it might be over, worried that if I gave in to that hope and it wasn't true, I was going to develop an attitude about Exodus that would be less than glorifying to God. I'm very glad I didn't give in to that hope because it made the next few hoursthat much more glorious. We went toa local church where we were told we could use the bathroom and cook our ramen because we were behind schedule. I sped walked to the church doors trying to keep my hopes down, and the roaring applause that greeted me when I opened the door was the sweetest sound I could have imagined. The staff as well as the students at SBFM (School of Biblical Foundations and Missions- a secondary school here) greeted us with smiles and cheers and a feast! (Our seats at the feast were covered with trash bags in order to protect the furniture from our grossness, a necessary precaution). They fed us delicious food ( one girl threw up because our stomachs were only used to ramen, but that didn't slow us down any). We heard a message about the depth of God's love for His people, demonstrated by His washing His disciples feet. In order to prove that love for us (and rebuild the trust lost from dragging us into the wilderness and lying to us for several days) the staff washed our feet. It was such a sweet moment as they brought out water basins and gave us handwritten notes of what they felt like God was saying for us as they'd prayed for us in the weeks leading up to our arrival. They tenderly cared for our smelly, dirty feet, cleaning them, drying them, and rubbing them with lotion. Then they prayed over us, asking God to bless and grow us in these next six months. At this point, one of Exodus's purposes was revealed to our hearts: If we hadn't been broken down like that for a few days, we wouldn't have been as vulnerable and open to receive from our loving God and staff in that way. Many people broke down as they encountered God's love and a little taste of what He has for us in these six months to come. (I also heavily suspect that some of those tears were from the sheer joy that we could take a shower when we got back to the base... but that's not quite as poetic).

We got home that night, showered and crawled into our warm, dry beds (that seemed a thousand times more glamorous than they had a few days ago) and fell into a relieved, grateful sleep. I woke up the next morning, my twentieth birthday, incredibly grateful to be spending it at the base and not still on Exodus, to several sweet cards and notes from my new YWAM family. I spent some time with the Lord, thanking Him for His faithfulness to me each year of my life, keeping His hand over me and growing me in Him by His own good pleasure. I also had some fun presents from my parents and Caleb which they had sent with me, making me smile and cry a little too.

Hospitality baked me a yummy cake!

The next few days were orientation days, learning rules and schedules for the next three months. We were split into our work duties, where they feel we can best serve and learn during our time here. I was placedin hospitality which will mean cleaning, baking, attending to the needs of those I'm living with with a hospitable spirit. I'm so excited to be grown in those new ways. We learned all about what lectures will look like, times of worship and intercession, as well as community outreach and outreach prep. Then we heard a ten minute introduction to our target countries for outreach- Nepal, Indonesia, Bangladesh, and a country that I can't specify forsecurity purposes- and were given twenty minutes to go and ask the Lord where He wanted us to go. Ever since I knew I was coming to Maui I have thought that I would be going to thatunspecified country, so wasn't I surprised when it seemed He was speaking something differently to me in the time we were given to pray. I wrote down both options, asking the Lord to give the staff clarity as the prayed over me.

Fast forward a couple of days of orientation to the outreach location reveal. We were put in a circle standing shoulder to shoulder facing outwards with our eyes closed. The staff came around and painted our faces different colors, each color representing a different country. We were told to open our eyes and started excitedly finding other people with our colors. We got in four groups and one by one the leaders told us what the colors meant. I was fully ready to hear the name of the unspecified country and was shocked when instead they announced that I was on team Indonesia! With the surprise came an overwhelming feeling of rightness. Peace spread over me and my heart recognized God's "yes" that of course, of course it's Indonesia, that's exactly where Hewants me to be! Praise the Lord for knowing better than I do, I'm so beyond excited to find out what He has for me there!

Today is our last free day as tomorrow lectures begin! I'm so excited to get started and find out all that God has for me over these next six months. Thank you everyone for your prayers and support! If you could pray for God to make my heart fully open to receive everything He has for me tomorrow and this coming week, and that everything I learn would grow deep roots in my heart and change me as He wills it to! Also for health as so many people living in such a small place has already resulted in quite a few colds. Thank you guys! If you want to know more details (trust me there's a million) or if you have anything I can pray for you for don't hesitate to email me mhplescia@gmail.com