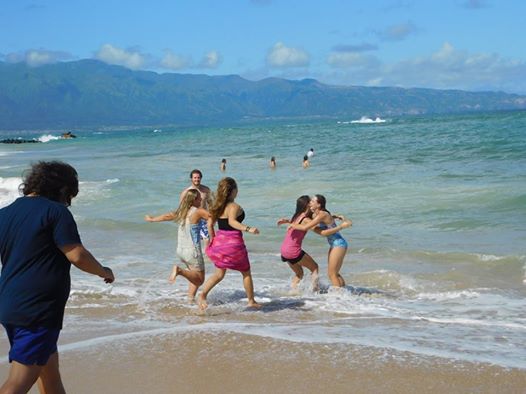 Hi everyone! Because of media fast last week I wasn't able to update! And because everything at YWAM moves at such a fast pace I have lost hope of ever being able to explain the depths of what's going on here, but know that God really moves through YWAM! To really understand all that takes place in a DTS you'll have to do one for yourself, and I hope that you do! :)

But I do want to share some highlights from the last two weeks! Week 4 was Biblical overview with Tom Osterhus, . He spent the week going through the major points of the Bible from old to new testament, showing how everything points to Jesus. It was incredible to watch God's story weave together and climax with the cross. It was amazing to learn in succession how He used person after person to draw our hearts to Him, and how from the very beginning all He's wanted is our love, and He has been relentlessly pursuing all of humanity since the beginning of time. His desire for us is so intense that He was willing, even glad, to suffer death on the cross in order to rescue us, a faithless, rebellious people who have made ourselves His enemies. As Tom went through Noah, Abraham, the judges, Saul, David, and other important points in Israel's history, it really painted a fuller picture of who God is, and on the final day when Tom told of Jesus's life and death, something we've all heard so many times, the room was heavy with the Spirit and many of were overwhelmed by God's sacrifice. It was an incredible week of lectures. They announced the media fast, but after hearing all God had done for us, we were lining up to turn our phones. If God wanted a week of uninterrupted intimacy with us, He could have it. (That wasn't our attitude a few days later when we all lay on Megan's bed and decided if we didn't get our phone back exactly at 1230 on Friday we were going to cause theschoolleaderphysical harm... but at least in that moment we had good perspective and glad hearts)

Which leads me to this past week, intimacy with God. Taylor Stutts, a leader at a Kona YWAM base called Fire and Fragrance, was our speaker. For me it was especially cool to have him speak, because I had really considered doing my DTS at Fire and Fragrance. God gave me a taste of what that school was like, and it brought fresh fire and zeal to our entire school, but at the same time He confirmed that Maui is exactly where I'm supposed to be.

Intimacy was a collection of topics, ranging from how God views us and our identity in Him, to smashing fears and banishing unbelief from our lives, to hearing God's voice. It was a week less focused on the lectures and more focused on letting God do whatever He wanted in each of our lives. He moved powerfully this week in a wide range of ways, seeming to meet people just where they needed. This is the perfect environment for this kind of week- walking into deeper intimacy with God, much like walking into deeper intimacy with anyone- can be a source of great joy, deep pain, and great frustration. To be surrounded by people walking the same path, deeply in love with the Lord, and always ready to pray is essential. Living with people older than us in the Lord, ready and willing to pour into us and speak wisdom where we need it makes growing in intimacy such a blessed time.

The lord met me this week, showing me how safe I am in Him. So often I don't want to really press into the Lord, worried that it's too much work to correctly posture my heart to hear Him, but as Taylor spoke this week about how we don't have to strive in our relationship with God, we get to seek Him from the place of realizing He's already crazy in love with us, I felt that pressure lessen. Sometimes I'm also afraid to really press in to hear His voice, because what if I hear it wrong? But He is so much bigger than my ability to hear Him perfectly and He is faithful. God was really teaching me this week that it's not about always getting it right, it's a process of growing and deepening. The things of Him already in my heart, He continues to deepen and establish, and anything not of Him, He plucks out. He takes me deeper and grows my roots as I walk with Him day to day, but it's a process and it takes time. Of course, YWAM is an accelerator, but I have my whole life of following Him- this is the least I'll ever know Him! How amazing is that? He'll keep taking me deeper and deeper, so long as I walk with Him. So, without fear of not being deep enough with Him, I can offer Him my heart day by day, and He'll meet me right where I am and faithfully take me deeper. He'll teach me better and better how to recognize His voice and how to walk in a manner worthy of the calling to which I have been called, I get to just rest in His love, knowing there's grace for every step. He's not after my perfection or all the ways He can use me. He doesn't care how long it takes to grow me, because it's not all the things I can do for Him that He wants- it's me. I'm the treasure. I'm the prize. I'm His end goal and His deepest desire. It's a process Him and I began long ago, and as some people get to begin it now with this awesome week of learning what it is to hear God's voice, Him and I get to build upon what He's taught me so far, and go deeper. I had such sweet times alone with the Lord this week, as He spoke wonderful things over me. While for some students this week can be ground breaking as they learn to hear God's voice for perhaps the first time, for me it was intense in a different way. God made me aware of all that He's done in me in the past years and all that He still wants to do. It was incredible to see His faithfulness and what He's brought me through when it comes to recognizing His voice, as well as all the depth still awaiting me as I continue to follow Him.

There's so much I could go into, but I better leave it there for now. A couple of other things from the last couple of weeks I wanted to touch on outside of lecture...

1) Outreach prep has been so much fun! I love my team so much, it's been amazing praying and preparing with them for all that God has for us in Indonesia! We also recently found out that before we head to Indonesia we'll be headed to Thailand for three weeks! We'll get to do a lot of work with women's prison ministry, the red light district, kids ministry, soccer ministry, street evangelism, teaching in churches there and Bible studies, as well as (my favorite part) working with the Khmer people! After last summer's missions trip to Cambodia I've longed to go back, and while in Thailand we'll be right at the border to Cambodia, so we'll get a chance to work with the people there and minister to them! I'm so excited! This week for outreach prep we learned the everything skit, which I encourage you to watch if you've never seen it! Here's a link!https://www.youtube.com/watch?v=cyheJ480LYA I'll be playing drunkenness.

2) Community outreach has been such a blessing! This past week we got to teach the children the story of creation. I also got a chance to pray with a girl who had been hit in the head and was crying. We prayed and God took the pain away in that very moment. She was shocked and kept saying that her chest felt warm. I explained to her who Jesus is and that He heals, and what He did for her on the cross, and her and a friend accepted Jesus into their lives right then! I love watching how God touches people with His power to demonstrate His love for them.

3) I had my chapel talk on Monday where I spoke on freedom from bondage. It was such an awesome time and I feel like the Lord really used it in some people in my school, as well as just in deepening me in the biblical roots o$f freedom. That in God we don't just have to fight against our flesh, but He'll really set you free from your sin. Of course, we're always going to sin, but daily sin and daily repentance is different than bondage- sin you can't get free from. This can include pornography, addiction to drugs and alcohol, anxiety, eating disorders, and other bondage. The bible is clear that we aren't meant to live that way, and that there's freedom in Christ, but so many Christians decide that that means reading good books and joining accountability groups. ThoughI do believe that those things have their place, in Christ there's true freedom. Freedom where God rips even the desire to commit those sins out of your heart, going to the depth of the lie that has caused addiction to those things, and in power speaking Truth and setting you free. There's a mini summary of my chapel talk, and if you want to hear more please don't hesitate to ask me about it- it's a subject I'm so passionate about. After having seen people get set free from bondage as well as being set free myself, it's something I want for everyone.

4) This week we got to enjoy some cool times of ministry, including a powerful worship night and a day for baptisms in the ocean! I got to watch some of my close friends get baptized and reflect on my own baptism at Clovis Christian when I was 17 years old. What a glorious time it was to see Him moving in my friend's life, and to remember everything God's done in me since my baptism!

God's moving powerfully here at YWAM! As always there's a million more things if you want to hear more, let me know! email me at mhplescia@gmail.com or text me at 559-917-0609

This upcoming week we have another YWAM team from Kauai staying with us, and we'll be learning about evangelism! If you guys could be in prayer for that, as well as that the Lord would reveal some details about where He would have Caleb and