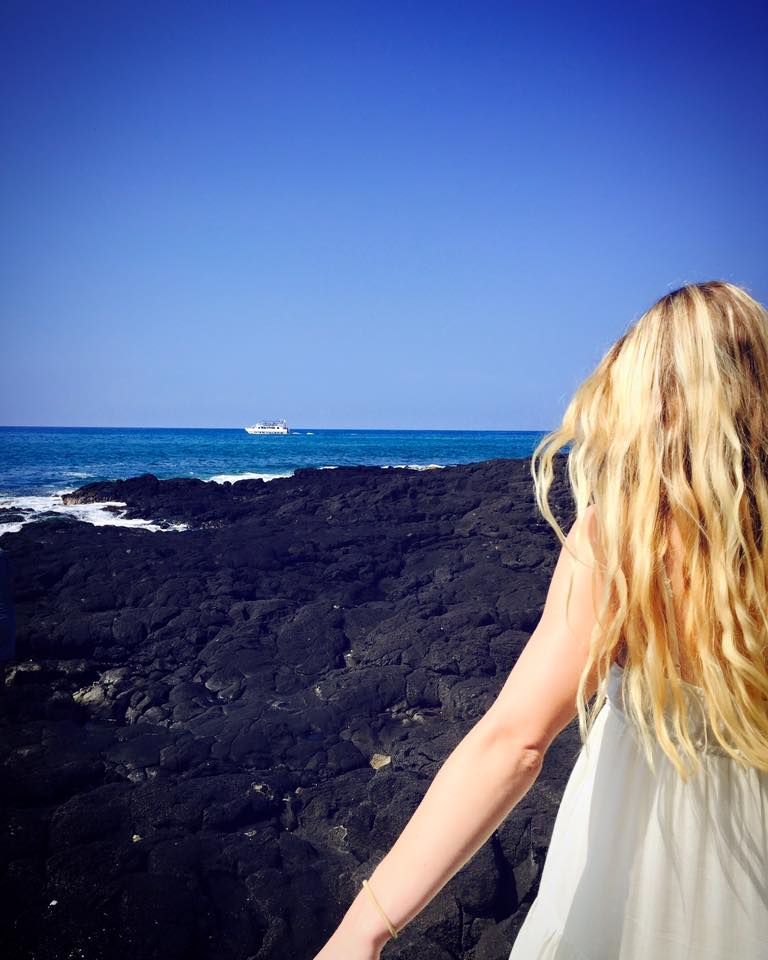 Well, week two of my Ywam(Youth With A Mission) dts(discipleship training school) is behind me, and I can honestly say it was the most life-changing week of my life so far. They say that a Ywam dts is equivalent toseven years of spiritual growth, and after this past week I have experienced that first hand. It's as if I'm a whole new person, a new creation in Christ. Not that I'm losing who I am, but that I'm growing into the person God created me to be. The person I've always wanted to be/known that I am, but have been held back by the roots of brokenness and lies.

One thing I want to quickly touch on is being able to volunteer at the Ironman World Championship last Saturday the 10th. If you aren't familiar with the Ironman triathlon, it's pretty much a triathlon on steroids. Athletes, INCREDIBLE athletes, come from all over the world and compete in this rigorous race here at Kona, and being apart of the action was a great blessing for me.

The station I worked at had the job ofhanding out gatorade to the athletes as they biked passed us. So picture this: you're standing in a lunge position on the side of the road and holding out a gatorade, an (amazing) athlete is racing toward you on a bike, they point to you(which means they want a gatorade), and you must start to sprint alongside them as they come up to you to (hopefully) successfully grabthe beverage (there were many of us spread out in case we missed someone). It was a bit nerve racking at first(unfortunately severalgatorades were harmed in process of us learning the technique), but after a few tries it was so dang FUN.

I just marveled at the hard work and dedication these people had. There were many elderly people in the race (and injured people using arm-peddling bikes as well), and it really made me realize that we can do almost anything when we put our minds to it. It's all about mental strength. And it was such a blessing to be able to be a blessing to these inspiring individuals.

Went to a church called Living Stone with 5/10 of my roommates(we get around by shuttles that come to the Ywam campus), and as you can (hopefully) see the view was goooorgeous.

started this week! (every week day every student has a work duty job to help the campus run smoothly). Our Holoholo dts was placed in charge of painting donated exercise equipment for the new campus gym.

The theme of the week was "The Nature and Character of God," and our speaker, Derek, was... I can't even think of a sufficient word, he was just really, REALLYawesome. I've never grown so much in my faith or in my knowledge of God more in such a short time.Like seriously, the task of describing what I got from the past week of lecture is pretty daunting considering how incredibly amazing it was. But heregoes my best attempt:


That is the amount of notebook pages I used to take notes while Derek was our speaker in class Monday-Friday. He had the greatest way of teaching profound things in such a simple/clear way. Imagine being mind-blown every 5 seconds for 3 hours a day and for 5 days straight. His God-given gift of knowledge and teaching changed my whole perspective on life, God, and myself. There's too much information/revelation to cover by explaining everything day by day (I'd be typing for hours if I attempted that), but I will just touch on what stood out/affected me most (which will probably be about 1% of what I learned).


It is not hate, but


I learned a lot about fear, which was awesome considering how much of it the enemy has attacked me with throughout my life. It's like the verse 1 John 4:18, "Perfect love drives out all fear"- when we truly understand the depth of God's love, there's no room left for fear. Fear doesn't come from God- He has not given us a spirit of fear. I learned that fear can cause us to doubt the character of God, which makes us doubt ourselves and our value in His Kingdom's work.


He is
(which means we don't have to worry about justice, He takes care of it).

A huge thing that struck me deep was when Derek said
.

Learning about the concept of "screams of rejection" was quite emotional for me. When we experience fear and rejection growing up, we put up a wall and don't accept love- we're so used to people leaving or giving up on us. And God was telling me right then and there that He's holding me through this no matter what- no matter how much I squirm and resist, He's going to be holding me and pouring His love on me until I'm mended enough to receive it- until my trust in Him is completely restored. And the coolest part? He
we are to Him.


Being in the world we live in, it is so easy to question the goodness of the Lord when things go wrong. But we know He is good- because He says so in His word. We have to
.

What we must remember, though, is this: That God has never intended for humanity to suffer pointlessly or endlessly. There is always a reason for suffering, and there is always an end to it in God's timing. And He never gives us anything we can't handle (no matter how many times the enemy lies to us so that we think otherwise).

I was remindedthat walking through spiritual "desert" seasons can be some of the most precious times in our lives- because of what we
through it.

It was so cool to learn about and to compare. Here's one of the charts I jotted down:

It just shows that
are everything; they make all the difference.


-ruled by love and freedom -brokenness (servant for others) -secure in the Father -opposite spirit (affirmation) -humility, loving others, UNITY -full of understanding based on grace and wanting reconciliation

I learned that there are different kinds of sorrow


: When we see our wounds as bigger than the wounds of Jesus, and we have a victim mentality ("poor me")


: Brings about repentance that leaves no regrets. Jesus became the victim- I am free to be restored.

-"Words have the power to bless or curse (spoken lies, when believed, are curses)."


were so very special to me- what I learned, what God spoke to me -what He stirred in my heart- it was all so incredibly amazing. I know for a fact that my life was changed forever and for the better within these days- something shifted in me, something too great for words.

Every Thursday night the whole campus of Ywam Kona meets together in what we call Ohana Court to hear from a speaker. This week's was a young guy so on fire for the Lord and so full of the Holy Spirit. I got so inspired to continue to sprint after God's plan for me- His plan for me to reach nations, to not just read history, but to
my battle.

I went to the prayer room after the meeting(quiet and air conditioned = my favorite place on campus), and had awesome Jesus/journaling time. My favorite part of my journaling says this in huge print:

Friday was quite awesome as well. God made it so clear to me that He's going to use me for big things in the nations- and whatever it looks like, I cannot wait.

I felt God putting His armor on me during class worship; suiting me up for battle, telling me I am
in Him.

I learned all about forgiveness and restoration in relationships from Derek. How forgiveness and repentancethrough Jesus is the only path to freedom, the only path to
the sin (that someone has done to us) -getting even -conditional (if... then) -an obligation to trust (HE is the only one we can trust) -a feeling -a process -forgetting (God can heal the pain associated with memories) -a one time event (every time it comes to mind/the enemy brings it to mind- tell him he's dumb, that you've already forgiven them).


relationship with God -letting go of your rights to justice and anger.

The knowledge of forgiveness Derek gave me was so crucial to the state of bitterness a part of my heart was in. It brought healing, and it brought freedom, and I will never forget that day. The day I
.