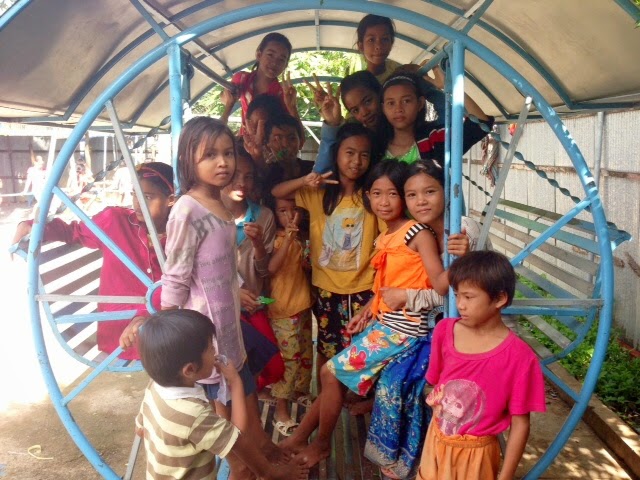 Once a month birthdays are celebrated at Kids Club. We enjoyed being there for the July birthday celebration. Diane (Fleenor) makes the cupcakes that are given to those who have a birthday this month. But they are not just handed to them without some fun first. All the kids are sitting on mats. The director holds a cup that has small pieces of paper in it. The names of the birthday kids are on some of the papers. Other papers have silly things that someone has to do. So the director stands with his/her back to the audience and throws over his/her shoulder a small fabric bag. The kids scramble to be the one to catch it. They screech with excitement. The kid who catches the bag goes to the front and picks out one of the pieces of paper. If it the name of one of the birthday kids, the child takes a cupcake and presents it to the birthday kid. But more often than not, it is something they have to do in front of the group. We saw one young boy have to walk like a monkey. A young girl clucked like a chicken. There is one young boy who has especially captured my heart. Diane said that when she first encountered him, she thought he might be a troublemaker. But he just has a lot of energy and a big infectious smile. She said that one month he drew a paper and was to sing a silly song. He sang a real sweet song about Jesus that melted her heart. Then Danica brought out her guitar and our group sang happy birthday to the kids. It was so fun. There is a young lady from Ozark Bible College who has spent the summer teaching the kids English. It is amazing to see how quickly the kids learn the songs we sing. we have done the same songs the three times we have been there this week and now they know them.There was a real young girl who later cried because she wanted "cake." It was hard to think that only the birthday kids get the cupcakes (that's not how we grew up) but yet making over 100 cupcakes each month is a big job. And this way, each child does get a cupcake once a year and can feel special on their birthday. I doubt they get anything else on their birthdays here.As we watched the kids jump rope using one large rope, I reflected on how I loved jumping rope as a child. Yes, I liked the large rope where there was someone on each end turning the rope. But I also loved my own jump rope. I'm going to look to see if I can find a few jump ropes to buy today. And maybe we can get a hundred of them to send with the next team that comes. That would be a great thing to have at Kids Club. We had not planned to go to Kids Club this morning (Friday). But no one wanted to say goodbye to the kids yesterday so the team decided to go back today. Rachel has salt water taffy to share and Taylor has some beautiful pins and things (from his dad) to give to some of the kids. And we want to talk to the Director about sponsorships. In our debrief last night, the team felt strongly that we should help every kid attending the Kids Club also be able to go to school. I know at least half do go but we would love to help ALL. So you will be hearing about such an opportunity! Half the team has experienced some stomach problems but no one has stayed down long. No one wants to miss any part of this mission and God has been merciful to us that we have been able to push through with some over the counter medicines and lots of water. It is so humid here that I am constantly encouraging the team members to drink more water. We miss all of you and look forward to sharing more about this incredible trip with you personally. in His grace and power,Cathleen